What is megalithic culture?

The beginning of farm life in Stone Age

About 3.500 B.C. a revolution took place in human development. It was the beginning of early husbandry in Northwest Germany.

The hunter gatherer lifestyle changed more and more towards a sedentary life with stockbreeding and farming.

Instead of living in huts and tents without fixed abode, they now built houses and founded settlements.

The builders of the megalithic graves lived during the last phase of the Stone Age the so-called Neolithic. In Northwest Germany we call it Funnel Beaker Culture or TBK for the abbreviation of its German name “Trichterbecher Kultur”. The culture is named for its characteristic ceramics, beakers with funnel-shaped tops. Often patterns are incised. The less we know about their settlement places, their everyday-life, and their appearance the more is known about their countless dead.

A House for Eternity

For most Neolithic people Megalithic graves were their last homes. In Northwest Germany so-called collective graves were predominant: an occupied grave would be reused for further burials. Skeletal remains of up to 150 individuals were found in one single megalithic grave. Tombs have obviously been used for burials over many generations. It is not known where the custom originates to bury the dead in such enormous burial chambers. The oldest sites exist in Brittany and on the Iberian peninsular. 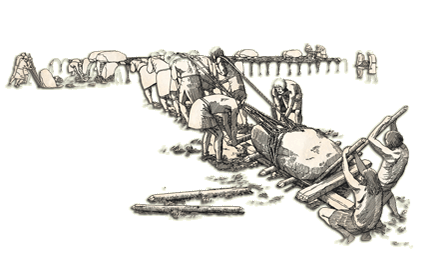 Material transport and construction of a megalithic tomb has been a time-consuming strenuous effort. Erratic blocks that is big granite boulders served generally as construction material. Quite often they were transported long distances to the designated burial place.

Various tests gave evidence that these stones – sometimes up to 50 tons in weight – had been moved and put into place with simple means, such as wooden rolls, levers, cordage and draught animals. The estimated construction time for a megalithic grave is only about 15 weeks provided you had 100 people to help. 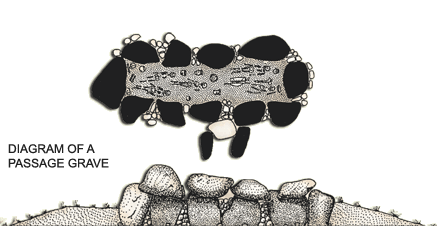 The construction types of the megalithic tombs are very different. Many different denominations emerged from their great variety of shapes: passage grave, chambered tomb, stone cist, gallery grave, long barrow, dolmen and other.

Passage graves are typical for the Northwest German area: The entrance is made of stones and south-oriented, probably related to midday sun.

Only sparse information exists abut burial rites. Ritual sacrifices as well as solemn ceremonies with food and drink, music and dance are conceivable.

Many megalithic graves have been completely destroyed in the course of time. The stones were often used to build roads, churches and fortification. Currently there are about 400 partly preserved graves. The original number is estimated to be ten times as high.

It is still very hard to conceive that people were once able to build such massive monuments without any modern technical aid. Already in medieval times giants (German “Hünen”) and the devil were made responsible for the construction. This is how names like “Hünengräber” (German “Gräber” = graves), “Devils Stones”, “Devils Oven” and “Devils Baking Trough” were made up. Another widespread idea was megalithic graves being pagan sacrificial altars. Some stones show signs of handling that might have occurred due to cultic acts.

Much more than just graves

The megalithic graves of the Funnel Beaker culture are not the only megalithic monuments. Stone circles, stone rows, temples and menhirs (individual upright positioned stones) also fall in this line. You may find such monuments from the South of Scandinavia through to North Africa. The most well-known are Stonehenge in Southwest England, the stone rows of Carnac in Western France or the temple sites on the island of Malta.

But despite all fascination long since emerging from megalithic graves, they are buried in oblivion at many places just waiting to be rediscovered!

Please, keep in mind during your visit that you are facing a unique cultural monument, we would like to preserve for many generations to follow.