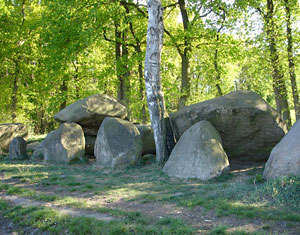 One of the most extraordinary tomb constellations is in the north of the Osnabrücker Land, northeast of Bippen beautifully situated at the edge of the forest. Two grave chambers set 50 metres apart stand out due to their size (20 and 19 metres) and their gigantic stones.

On top of that these graves are connected by a 53 metre long stone row, unique in North Germany. The function of this row has not yet been scientifically clarified. Both chambers are extremely well preserved. Grave I (north) lacks only two of formerly nine capstones, whereas Grave II (south) still has all nine capstones.

Southeast of Bippen in the northern Osnabrücker Land in the immediate proximity of a farm is a nine metre long megalithic grave. Most orthostats and capstones still exist, but are partly destroyed. In 1926 an amber necklace and pottery was found. 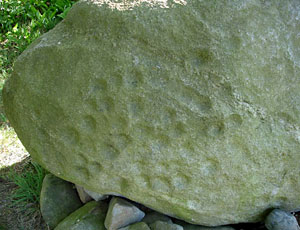 A cup-marked-stone known as Duevelsteen (Devils Stone) is only a couple of steps away. The granite boulder is 1.75 x 1.15 x 1.10 metres in size and was moved, so that it is no longer at its original position. It has a total of 66 cup marks on the surface that so far elude all reliable scientific explanation. Legend tells that the devil sat on the stone at night time and while thinking out evil deeds he pressed holes into the stone with his thumb.