Amidst the sandy moraine landscape of the Hümmling, the heart of the Emsland, are several remarkable megalithic graves concentrated so close together that one can hike from one to the other along the Hünengräberstraße. A lot of information is provided at the visitor’s car park at the road between Groß-Bersen and Hüven.

The westernmost grave, Ipeken Tannenwald, is just south of the road on a woody hill. The orthostats of the ten-bay chamber are for the most part still in the ground. Most capstones still exist. The oval enclosure is incomplete.

“Im Ipeken” is the name of the grave some 200 metres east. It has a smaller chamber (8 x 2 metres) without enclosure but is exceptionally well preserved – all four capstones are still in situ.

Next to the car park is the Wappengrab. It got this name, because the chamber’s western bay with its outstanding capstone inspired the Emsland coat of arms (“Wappen” German for “coat of arms”). The grave is surrounded by a number of very poorly preserved graves that did not become part of the Route of Megalithic Culture. 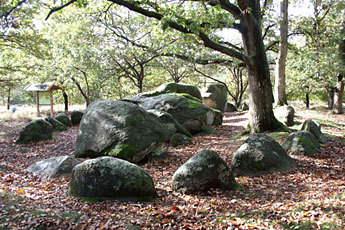 In the forest north of the road is the Königsgrab (King’s Grave) one of Emsland’s most well-known megalithic tombs. It ascends out of the remains of a 24 x 12 metre large mound in the heathlands. Enclosure, orthostats and capstones are basically well preserved and depict a vivid picture of the original monument.

Just 100 metres away from Kings Grave is a megalithic grave that has been reconstructed in the 1950ies. It gives a striking suggestion of how megalithic graves of the region must have come across 5.000 years ago. Only the entrance area has been reconstructed slightly steeper due to technical problems. During an excavation in 1955 shards of about 330 pottery vessels of the Funnel Beaker Culture, 22 flint arrowheads, further stone tools and a copper disc were found.