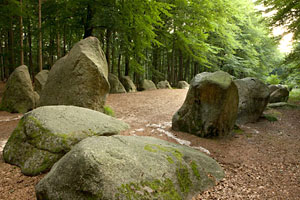 One of Northern Germany’s most well-known megalithic graves is located in the extended woods of the Wildeshauser Geest halfway between Visbek and Ahlhorn close to motorway A1. The enclosure, 104 x 9 metres, a rectangular barrow is the longest in Lower Saxony. The grave chamber itself situated in the western part of the enclosure seems rather minute in comparison. About 130 stones of the stone rows are still intact today, but around 170 stones must have been necessary at the time to build the monument.

Four more Neolithic megalithic graves are preserved in the near vicinity of this monumental alignment. The so-called “Bride’s Carriage” (Grave V), a few metres southeast of the “Bridegroom”, is the most respectable. The four-bay chamber is still completely preserved, but it has no enclosure.

A path - called “Brides Walk” - leads several kilometres through the forest to the “Visbek Bride”. Both monuments are not only interlinked because of the name and the connecting path, but also because of a legend: cf. Visbek Bride (Station 28a). 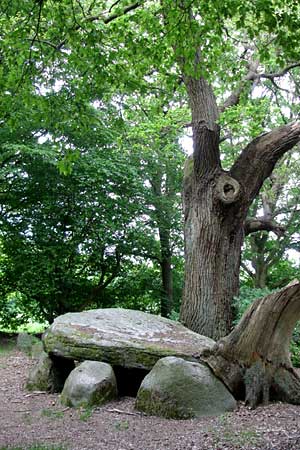 This grave is only 300 metres away from the Visbek Bridegroom at the beginning of a hiking trail leading through the woods of the Wildeshauser Geest. The trail starts at the restaurant “Engelmannsbäke”. Like no other grave has the Pagan Offering Table influenced romantic ideas about Neolithic graves. It has inspired many a piece of literature or fine arts of the 19th century.

The mighty capstone must have made people think of a pagan sacrificial site, because its smooth surface looks like an altar. The stone is among the biggest of its kind in Northern Germany with 5 x 3 metres and 1.2 metres thickness. It was actually probably even been shortened due to blasts at the beginning of the 19th century. All orthostats of the 9.5 x 2 metre grave chamber are preserved and remains of further capstones lie within the chamber. 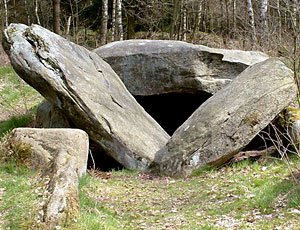 Not far off the Brides Walk from Bride Groom to Visbek Bride amidst the woods of Wildeshauser Geest are the Ahlhorner Kellersteine. These are two megalithic graves quite close to each other that are wrongly in the shade of the well-known surrounding monuments. The chamber of the western grave is 11.3 metres long and still has five remarkably huge capstones.

The eastern grave is smaller and still partially sticking in a covering earth mound. It is to a certain degree destroyed, but the remaining part of the grave chamber represents a typical megalithic grave. The capstones are as mighty as those of the neighbour. The capstone is broken in half and lies inside the grave.