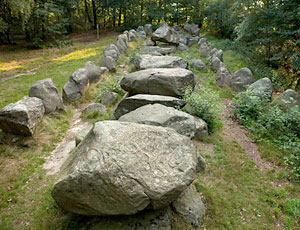 The Kleinenkneter Stones are three neighbouring megalithic graves south of Wildeshausen. Grave I and II are among the most impressive in all of Lower Saxony. Quite often they are simply named “Big Stones”. Grave III has been deployed to this place and all its capstones are missing.

The barrows of the Kleinenkneter Stones have been excavated between 1934 and 1939. More than 10,000 sherds of pottery vessels, stone adzes, arrowheads, amber pearls, a small copper disc and a lamp with five pick holes were discovered.

Coming from the village street the visitor will approach Grave II first. Its enclosure is 34m long and six to eight metres wide. The grave has a unique feature: three fairly well preserved chambers that facilitate perceiving the aisle. It is assumed though that the middle chamber was built at a later date subsequently connecting two individual older graves. 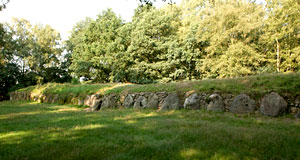 Grave I is even bigger than its twin. The enclosure is outstanding 49 metres long and seven metres wide. The grave has been examined in the 1930s and reconstructed afterwards. So today visitors get a good picture of a Neolithic megalithic grave site. The grave chamber has a rare north-south orientation and the entrance emerges slit-like at the eastern long side of the mound. The spandrels of the surrounding stones have been filled with dry masonry made of quarry stone.