The megalithic grave is situated east of Dötlingen. Its rather unusual name is evidence of an occasionally confirmed old tradition: Neolithic sites were used for trials in later times. In case of Dötlingen Place of Trial it is documented that between 1742 and 1812 the owners of the close-by Aschenbeck farm pursued offences against forest laws (“Holzgericht”) at this place. The grave is not very well preserved. Some orthostats and one capstone lying in front of the grave are extant. 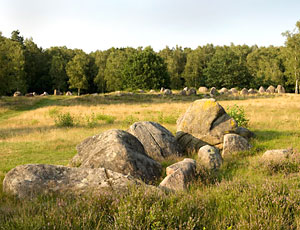 Glaner Bride is actually a group of four megalithic graves on a sandy, heather-covered elevation on the west bank of Hunte River near Dötlingen. The charming trail from Dötlingen to the graves leads through the Hunte river valley. The group already attracts attention from a great distance due to their size and location. The story of the name affix “bride” has not been passed down.

With a length of 50 metres and a width of 6 to 8 metres Grave I is the largest of the group of four. The surrounding is a rectangular barrow. The stones of the enclosure are almost all preserved, but the grave chamber positioned in the western part of the grave has a lot of voids. No capstone and only few orthostats are recognisable. 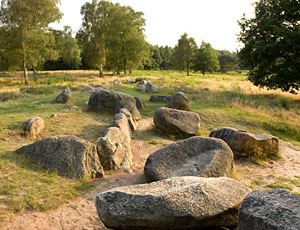 Just a couple of metres away at right angles to Grave I is Grave II. It is the same type of rectangular barrow with small chamber. It is slightly more modest in size – 30 metres. The chamber’s orthostats are complete, though all but one capstone are missing.

Grave III is a little aside and seems smaller than its neighbours, because it lacks an enclosure. The chamber is 6 x 2 metres and much better preserved than Grave I and II. Three of four capstones still exist. Grave number IV was not taken into the Route of Megalithic Culture, because it is in such bad shape.

This partially reconstructed grave is situated in the middle of Dötlingen. At the beginning of the 20th century it was decided to build a shooting range on the premises, hence the grave was severely destructed. In the 1950s it was examined; grave goods like 1.2 t of ceramics and an amazing amber necklace appeared and were documented.

The grave allows detailed insight into the chamber’s paving which is to some extent preserved. The spandrels between the orthostats have been filled with dry masonry again like it used to be originally. The 18.5 metres long chamber is not so well preserved; there are a lot of voids at the eastern end.