The Großen (great) Karlsteine north of Osnabrück are among the most well-known megalithic graves in lower Saxony. Their name derives from a legend whereupon Charlemagne worked wonders on the stones. Charlemagne split one of the enormous capstones in half with his whip, after the pagan Saxon duke Widukind had asked for a divine revelation. The excellent state of preservation and the immense impression, increased due to the grave’s position at a steep slope in deciduous forest have established the reputation of this megalithic grave. As early as the 17th century the Karlsteine were a popular motif in literary work and fine arts. 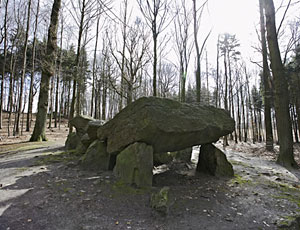 Contrary to all other megalithic sites in the Weser-Ems area the Karlsteine have not been built of Ice Age boulders (gneiss or granite). They were made of sandstone from the nearby Piesberg quarry. The grave chamber is not exceedingly big, only 8.5 x 3 metres, but the stones used are all the more impressive. The biggest capstone is 3.7 x 2.2 x 0.8 metres. Orthostats and capstones are almost completely preserved. Early but poorly documented excavations came up with some findings.

Just a couple of metres south-east to the Großen Karlsteine are the Kleinen (small) Karlsteine. This grave is contrastingly modest and very much damaged. But it was also built of Piesberg sandstone. The grave chamber originally had four bays.