Amidst impressive scenery south of Ankum near Westerholte a well signposted walking tour has been established, leading past a golf club through heathlands and pine woods. The trail is 2.5 kilometres long and passes six megalithic graves as well as some Bronze Age burial mounds. 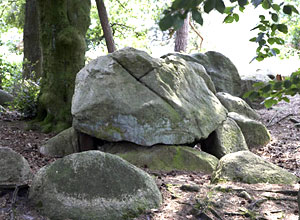 The walking tour starts at the parking lot with grave Rickelmann II. This tomb had a 14 metre long chamber, most of the orthostats and capstones still exist, though some are displaced. The stone kerb is only rudimentarily recognisable.

Tomb Reinicke (9b) is situated in a romantic pine forest. It used to be of almost the same size as Rickelmann II, all capstones but one are lost.

Tomb Meyer (9c) was supposedly one of the finest and biggest graves in the region. Today only modest reminders are left of former glory. Nine of the original sixteen capstones still existed in 1864, giving a total length of at least 25 metres. The tomb was embedded in a 30 metre long mound still recognisable in the landscape.

When the hiking trail was planned in the 1970s also detached grave mounds were included into the course of the trail. Mound (9d) is 21 metres in diameter and 2.1 metres high. Its secluded position leads to the assumption that it belongs to the older mound types of late Neolithic (from about 2,800 BC) or early to late Bronze Age (2,000 till 1,200 BC).

The grave Grumfeld East (9e) is fairly shattered. Many stones have been damaged in explosions. The chamber might have been nineteen metres long.

Upon closer inspection of another mound it turned out that the central grave chamber was designed like a minimised version of a megalithic grave. It is a stone cist (9f) built of six one metre high boulders and sealed with three big capstones. It dates to early Bronze Age (about 2,000 BC). But the mound has been re-used for an urn burial some 1,000 years later at the transition to late Bronze age.

The pavement-like covering oft the mound’s surface with small gravel was formed when the entire burial site was reconstructed.

The last mound along the trail (9g) has a so-called crown pit - a distinct hint to illicit excavation. This is the old excavation shaft that has been left open after the excavation.

Grumfeld West (9h) adjacent to the golf club is the most impressive grave along the trail “Steingräberweg Giersfeld”. The stone kerb - 32.5 x 3.8 metres in size - encloses two grave chambers. The western one of the two is almost completely preserved and grave goods were found in 1982.

At the end of the circular tour is grave Rickelmann I (9i), which still has four of its former eight capstones. The grave chamber is of average size, 12 x 2.4 metres. A stone kerb is not detectable.