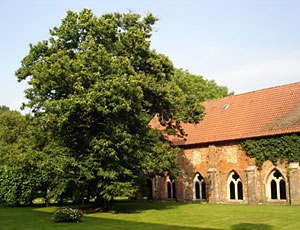 The former Cistercian convent Börstel has a very idyllic setting in the utmost north of the Osnabrücker Land at the rim of Ankumer Höhen. It is a protestant ladies’ foundation (Damenstift) and conventuals still live here. Throughout the year numerous cultural events take place on the premises and it is also a conference centre. Guests are invited to stay at “Alte Stifts-Schänke” inn or the beer garden.

The Cistercian convent was relocated into the middle of the forest to today’s site in 1251 after it had been founded a couple of years before by Counts Otto and Johann of Oldenburg in Menslage. The single-nave early gothic convent church of the late 13th century is the oldest brick building of the Osnabrücker Land. The complex is remarkably well preserved and has furthermore two-storey convent buildings. The south and east wings of the cloister are also preserved.

In the immediate vicinity a granary built of boulder masonry is also preserved. It is assumed that this granary dates from the time when the convent was first founded and is a prominent example of the wide spread tradition of Steinwerke (= houses entirely made of stone as opposed to half-timbered or wooden houses) in Osnabrück and the Osnabrücker Land.