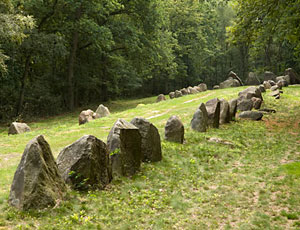 Halfway between Wildeshausen and Ahlhorn in the woods of the Wildeshauser Geest is Lower Saxony’s second biggest barrow (only Visbek Bridegroom is bigger): The “Visbek Bride” is a mighty barrow with a long, rectangular 80 x 7 metre enclosure. Many of the former 100 stones are still in their original position. Four stones at the south-western small side are very impressive; they are about 2.5 metres high each. The chamber at the south-western end of the barrow is rather modest in comparison though, just 5.5 x 1.5 metres. Only one capstone still exists.

A path - called “Brides Walk” – connects the Visbek Bride with the Visbek Bridegroom (Station 24a). The trail leads four kilometres through the woods of the Wildeshauser Geest. The name alliance is based on a legend:

"Once upon a time there was a big farm amidst Ahlhorn Heath. The owner was a proud and grasping man who wanted to wed his only daughter to a rich farmer’s son in the neighbourhood. Only, the girl loved a poor shepherd who had been her companion in child days. But the stone-hearted father paid no attention to the pleas of his daughter and scheduled the wedding day against the will of the girl.

At the morning of the wedding a procession of well dressed people moved over the heath towards Visbek. First in line was the adorned bride with her parents followed by family and neighbours. The bride was as pale as death, tears in her eyes. They got closer and closer to the village; one could already hear the chimes of Visbek. – And then the girl lifted her eyes to heaven and begged to God: “Please, help me, oh God! I rather turn to stone right away than belong to a man I cannot love.” Hardly had the words left her mouth, the procession froze. Where just then people of flesh and blood had walked along, two lines of mighty stones arose next to each other. The myrtle crown, the flowers and the ribbons changed into grey lichen and moss. – The bridegroom’s procession suffered the same fate and also turned to stone. The mighty boulders there tell the story."(from: Etta Bengen, O Wunner, o Wunner. Wat ligg hier woll unner? Großsteingräber zwischen Weser und Ems im Volksglauben. Oldenburg 2000)

In the woods west of Wildeshausen is a megalithic grave called “Great Stones”. It is situated north of the hamlet Thölstedt right at the wayside to Visbek Bride. The chamber is mostly hidden in the grave mound, 10.5 x 1.8 metres in size and four capstones are recognisable.